Experts urged separate policy for cottage, micro and small enterprises and other for medium 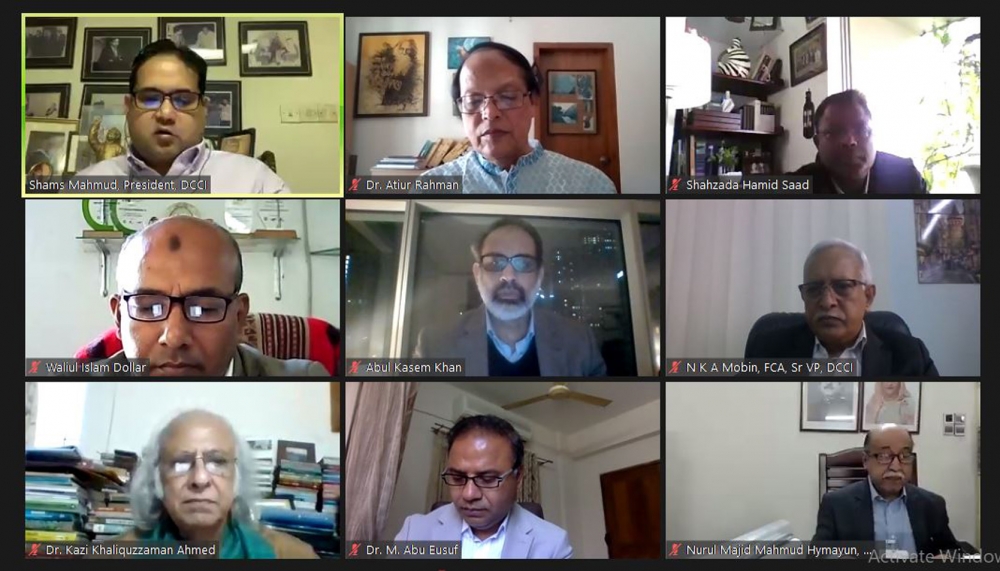 DCCI President Shams Mahmud in his welcome remarks said in 2019-20 the contribution of industry to GDP was 35.36% that increased by 6.48%. During the last three decades Bangladesh’s industrial growth was mainly RMG centric. But for the sake of diversification of industry as a whole Shams Mahmud urged for the development of leather, jute, agro-processing, ship-building, light engineering, pharmaceuticals and non-traditional items. One of the main constraints for SME’s development is easy access of low-cost financing even in the case of loans under government’s stimulus. To face the challenges of SME development he recommended to to outline a uniform definition of MSME in the Industrial Policy and Bangladesh Bank. Mr. Shams also recommended to give separate incentives and allot plots to the import substitute SMEs in the SEZ. He underscored quicker completion of ETP in Savar tannery estate. He also requested to form a high level task force under the government comprising of private sector stakeholders like SME Foundation, MCCI and DCCI to monitor implementation of industrial policy. The DCCI President also urged for two separate policies for cottage, micro and small enterprises and the other one for medium enterprises.

Industries Minister Nurul Majid Mahmud Humayun, MP said for an inclusive development of economy improvement of cottage, micro and small enterprises is important. He also said that 35% of stimulus package announced for the CMSMEs has been disbursed up to October 15th. We need to increase contribution of CMSMEs to GDP which is 25% now as well as strengthening backward linkage industries to reduce import dependency. Government is facilitating women entrepreneurs giving various incentives, he added. We have a big local market and he urged to utilize our own skilled workforce in the BSCIC industrial units. He termed Bangladesh as one of the best competitive market having intelligent, young, confident and energetic workforce. He also said that government is considering to separate threshold for cottage, micro and small from the medium enterprise in the next industrial policy. Creating new entrepreneurs, strengthening backward linkage industry, employment generation, reducing discrimination between urban and rural economy will get priority in the next industrial policy.

Dr. Qazi Kholiquzzaman Ahmad, Chairman, PKSF urged to do a skill mapping to eradicate skill gaps. Industrial policy should focus on policy coordination and institutional coordination for better productivity. New entrepreneurs should also get incentives from the stimulus package for inclusive and sustainable development, he added. Policies, that are environment friendly and socially accepted are sustainable, he mentioned. In the industrial policy, he suggested to segregate cottage and micro from small and medium enterprises. Sector specific planning needs to be reflected in the next industrial policy, he said.

Dr. Atiur Rahman, former Governor of Bangladesh Bank and Professor, Department of Development Studies, University of Dhaka said Bangladesh’s economy was progressing inclusively at a faster pace but unexpectedly Covid 19-led pandemic came as a shock. In the time of framing a new industrial policy, he suggested the policy makers to be realistic. He also urged for export diversification, use of technology and skill development. Dr. Rahman also mentioned that as the demand has come down, employment generation will be challenging. Our industrial contribution to GDP is quite satisfactory but the employment generation in terms of GDP is still hovering to 18-20 percent. He also stressed on SME and agriculture sector to get priority in the industrial policy as one fourth of GDP comes from SMEs. Regarding stimulus he recommended to give term loan to the SMEs for the next six month and re-payment time limit should be given at least two years. He also mentioned that government may consider bank accounts of e-commerce and f-commerce entrepreneurs as their trade license to bring them under monitoring.

Dr. Md. Masudur Rahman, Chairperson, SME Foundation said contribution of SME to our GDP is only 25% and that should be enhanced. Moreover, industrial productivity and diversification need to be increased, he mentioned. He also said that in the wake of 4IR, most of labour intensive industries will adopt technology in future. He also suggested re-defining SME and including sales turnover in the definition in the next industrial policy. He also suggested to solve discrimination in the TAX and VAT policy.

Husne Ara Shikha, General Manager, SME & SPD Department, Bangladesh Bank said as the women entrepreneurs engaged in e-commerce and f-commerce do not have any trade license, they are deprived of access to finance. She also urged to include retailers in the definition of trading business. She said new entrepreneurs should also get term loan from the stimulus package as working capital for their survival. She suggested to create a crisis meet up fund in the Bangladesh Bank for any natural disaster if we experience in future.

Abul Kasem Khan, Chairperson, BUILD & former President, DCCI said CMSMEs should get special priority in the Industrial Policy. Moreover most of CMSMEs do not have good transaction record with the banks, so to bring them under financing scheme, an alternative financing mechanism should be in place, he said. He also said that our industrial policy should be as per our growth aspiration and based on research and analysis. He said, the next industrial policy needs to focus on post-Covid new normal situation, challenges of 4IR, skill development and graduation from LDC including a road map. Industrial Policy should also stress on logistic issues, import substitute backward linkage industry set up, infrastructure development and coordination among the concerned wings of the government.