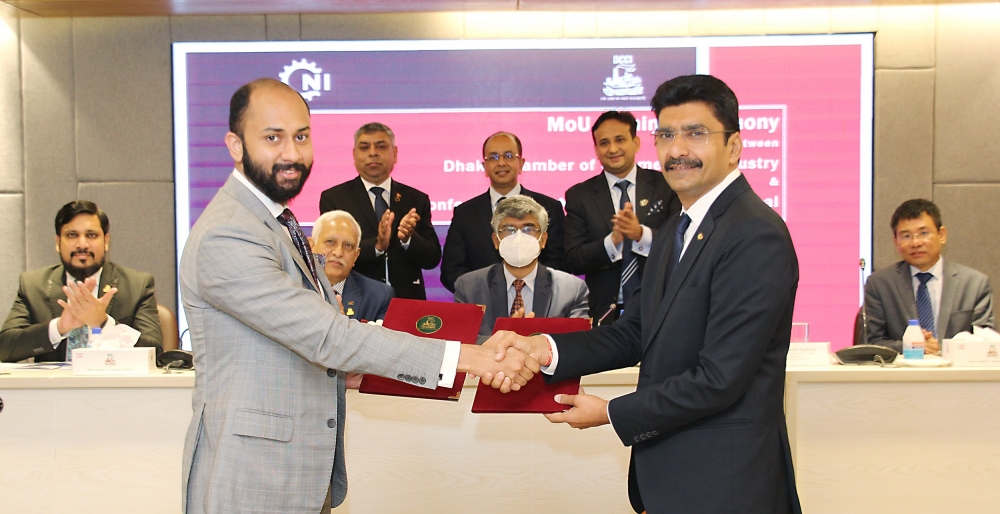 A Preferential Trade Agreement (PTA) between Bangladesh and Nepal is in the final stage, said the Commerce Secretary of Bangladesh Tapan Kanti Ghosh. Being present as the chief guest he made this remark at the business networking meeting between the Dhaka Chamber of Commerce & Industry (DCCI) and the visiting business delegation from Confederation of Nepalese Industries (CNI), Nepal held at DCCI on 14 December 2021. DCCI President Rizwan Rahman chaired the meeting. Meanwhile, a memorandum of cooperation (MoC) between DCCI and CNI was also signed during the meeting. DCCI President Rizwan Rahman and President of CNI Vishnu Kumar Agarwal signed the document on behalf of their respective organizatons.

The Commerce Secretary Tapan Kanti Ghosh also said that there are various commonalities between Bangladesh and Nepal and both the countries are going to be graduated from the LDC category in 2026. He hoped that soon the PTA will be signed after getting final nod from the Nepalese side. Bangladesh is a very big market of huge consumer base especially in the FMCG sector and Bangladesh has to import a large quantity of consumer items like edible oil, lentil, sugar etc. He urged Nepali businessmen can leverage this opportunity. He also termed that the memorandum of cooperation signed between DCCI and CNI is a milestone for the both-way trade and commerce. He expressed his hope, that this cooperation will boost bilateral trade and investment to a further level.

DCCI President Rizwan Rahman in his opening remarks said that both nations work on common interests at various international forums including SAARC, BIMSTEC, WTO that bolster our diplomatic and economic friendship. The bilateral trade is around $73.47 million in FY 2020-21 having positive trade balance for Bangladesh. RMG, Pharmaceuticals, Agro-food processing, Jute goods, ITES, Light engineering, electronics have great investment and trade potentials as Nepal is one of the preferred investment destinations for Bangladesh. Nepal can invest in our agro-processing tourism, financial sectors and SEZs. He also urged Nepal to consider BBIN connectivity deal to exploit our economic opportunities.

Charge D’ Affairs of Embassy of Nepal in Bangladesh Kumar Rai said according to World Bank and IMF Bangladesh’s economic progress is quite good. He appreciated the Bangladesh government’s long-term plan to reap the benefits of blue economy and high-tech industries. Nepal has the highest peak in the world and Bangladesh has the longest sea beach in the world. Therefore tourism can be a promising sector of mutual preferences, he said.

Leader of the Nepalese delegation and President of CNI Vishnu Kumar Agarwal said agriculture, tourism, energy, education and IT sector are some of the potential sectors where entrepreneurs of both the countries can be benefitted. Nepal is now giving priorities to its transformation from trading led economy to manufacturing based economy. So, this move will create an immense opportunity for huge investments. Moreover, exchange of delegation will foster bilateral trade, he said.

Vice President of CNI Nirvana Chaudhary said that they have already invested in Bangladesh in the FMCG industry and they have a plan to invest in beverage and hospitality sector in future. He also termed Bangladesh as a preferable destination for investment for its friendly incentives and policies. “Bangladesh is an important market for us”, he said.

Later, Senior Vice President N K A Mobin, FCS, FCA gave vote of thanks. DCCI Vice President Monowar Hossain and members of the Board of Directors of DCCI and CNI were also present.

The 13-member CNI delegation of Nepal will leave Dhaka on 16 December 2021.