UK keen to invest in higher education sector in Bangladesh 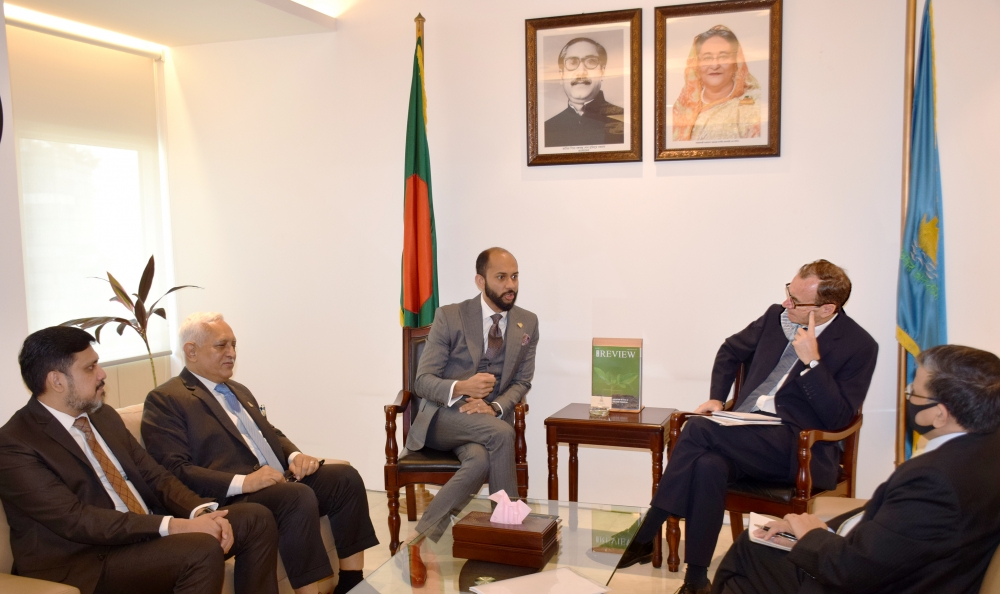 The British High Commissioner in Bangladesh Robert Chatterton Dickson paid a courtesy visit to Dhaka Chamber of Commerce & Industry (DCCI) and met its President Rizwan Rahman to discuss various bilateral issues relating to trade and commerce. The meeting was held on 09 February, 2021 at DCCI.

During the discussion, The DCCI President Rizwan Rahman said the United Kingdom (UK) is the third-largest investor in Bangladesh and also the third largest export destination of Bangladesh. In 2019-20, Bangladesh exported goods worth US$ 3.45 billion to the UK against the import of US US$ 411 million. Rizwan Rahman said that UK is the second largest export destination for locally developed software. In 2019-20, 13 percent of country’s total software exports were destined to UK which is third in terms of overall export. He also appreciated the UK government for allowing Bangladesh to continue duty free access to the UK market even after the brexit. He also urged the UK to consider establishing a country-specific economic zone in Bangladesh.

The British High Commissioner Robert Chatterton Dickson in his speech said that Bangladesh has done a commendable progress in the economy. Health, financial sector, higher education and FINTECH are some of the potential sectors in Bangladesh to attract investments, he added. He also said that a good number of British companies are in operation here in Bangladesh and they are doing well. Regarding attracting more FDI, he suggested being more competitive and strengthen business friendly environment. He also highlighted on skill development and quality education for the young generation especially as per the need of industry. The British High Commissioner also mentioned that the UK Universities are keen to invest in Bangladesh’s higher education sector in a format of cross border higher education but to expedite it policy guidelines /regulations need to be effective. Besides, a trade-talk between Bangladesh and UK would be held from the next week to discuss bilateral trade and investment issues, informed the High Commissioner.